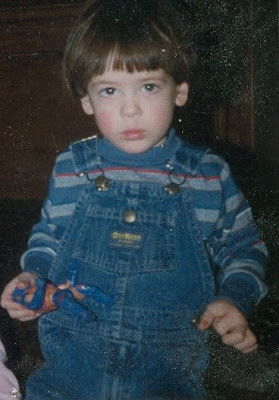 As McKay was being born I heard Dr. Harris say, "My Three Sons." What a moment in time that was for me.

When my Dad came to see us at the hospital later the next day, he said, "He does not look like you." He had a very full head of hair, dark coloring, and even bushy side burns. His brothers were both born bald. He looked Hispanic at first. Nothing wrong with being Hispanic, but we aren't Hispanic.
Logan holding his new baby brother McKay. 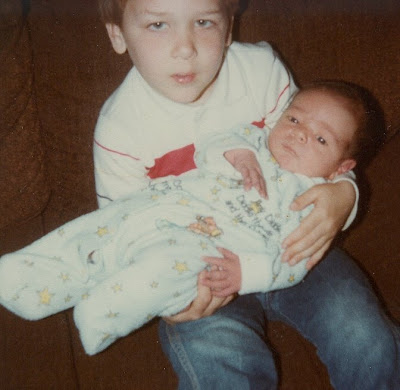 Apparently I wasn't taking my dad seriously enough, because then he said, "You know they do mix things up sometimes. They do make mistakes in hospitals."

I guess this nurse had heard this before from other mothers because she just looked at his wrist band, looked at my wrist band and then said, "Yep he's yours!"
Good, because he was very cute and I wanted to keep him!
(BTW, I soon saw features in him that I recognized as one of mine. Plus some of his teenage pictures look so so much like my Dad's teenage pictures! Case closed)
Brothers playing detective
Brock, Tyler, McKay, Logan 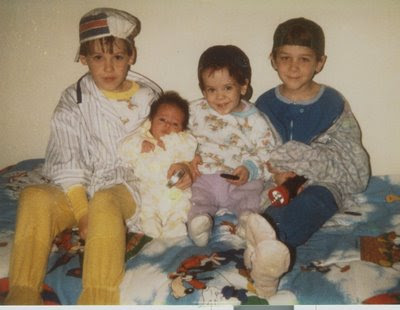 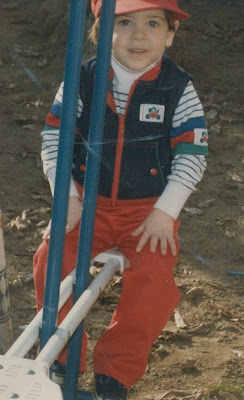 If there is one word I would use to describe McKay while he was growing up, I would have to choose, "good". He didn't like to stand out. Just liked to be part of the group...doing whatever he could to make those around him happy. Raising him was like a day at the park.

He was so humble that we were surprised when we found out he was one of the top math students at his high school. He will be graduating next month with a math major at BYU. He has plans to go on to graduate school, and then to get a PhD. 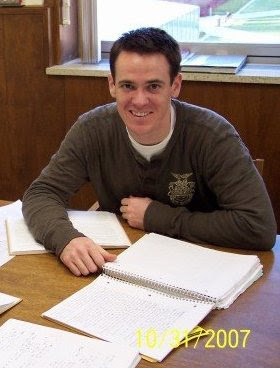 One of his roommates was once asked to write about an interesting person for one of his classes at BYU. He chose McKay. Here is an excerpt from that:

"To me McKay Heasley is like Nathaniel of old: 'an Israelite indeed, in whom is no guile,'" said Jacob Riddle, a junior majoring in biology.

Another of Heasley's roommates and a former mission companion, Steve Orton, agreed.

"He's one of the few people I know who are without guile," said Orton, a sophomore studying business. "He's very much an open book."

"I've never known anyone who's like him," Shelley said. "Truthfully I've never heard him say an unkind word about anybody."

I remember the day we had to wait in a line AGAIN just so McKay could stay "thank you" to Santa. He insisted. He forgot when he was on his lap. 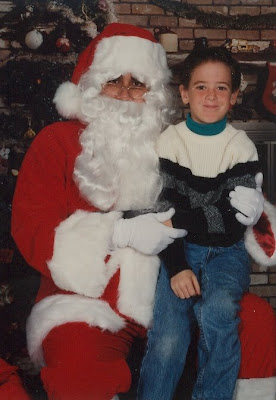 He was on stage often in high school. His senior year he got the lead for Harvey. 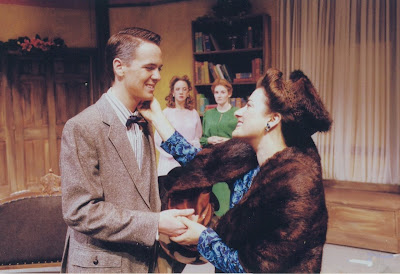 At the airport just getting ready to take off for 2 years. 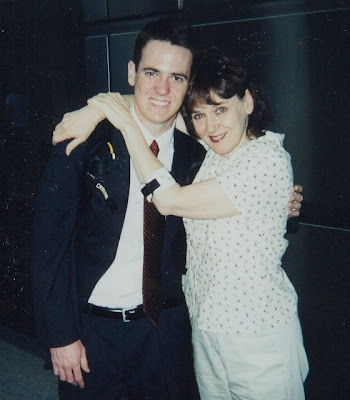 We are very proud of you McKay.

Have a wonderful birthday tomorrow!!!! 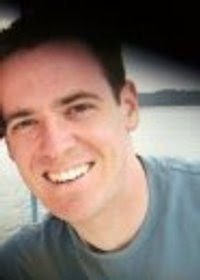 Anonymous said…
This is beautiful Jill. What wonderful boys you have! I love seeing all the old pictures. Love, Dad and Susan
March 7, 2009 at 11:36 AM

Mary said…
Yep, you definitely brought the right baby home! All of your boys are such a blend of you and Bill, they can't deny either of you as their parents.

Jill, these pictures are all so cute. I loved the one of the play. I saw him in it. He was fantastic. I think he was even better than Jimmy Stewart and that is saying a lot from me. I LOVE Jimmy Stewart.
March 7, 2009 at 3:04 PM

grandmapeg said…
McKay is definitely yours or all of the boys come from one other set of parents because they all look like brothers! What good looking sons you have! Tell McKay happy birthday for me!
March 7, 2009 at 6:20 PM

Richard said…
McKay is the bomb.com!! Finally a Rozier who can use math skills for something other than being a good card player!
March 7, 2009 at 8:52 PM

Dennis said…
Happy Birthday, McKay. I remember when you tried to teach me the "fun" associated with Geometry. Not a success. But it is nice to have someone with the Math gene in the family.

Lisa said…
Loved your tribute to McKay! He touched my heart and I only met him once. He was so polite and so kind and very engaging. We were both waiting for an interview with the Stake Pres & the we just exchanged a few words, but I was so Impressed by his wonderfully, kind and polite demeanor; I doubt I'll ever forget him.

C Dawn's bucket said…
When my mother brought home my little sister we had such kind things to say as "she's a monkey take her to the zoo,." "why did you bring home a little indian baby?"
She was and still is very dark in complexion, had a full head of dark hair, and my brother and I were certain she couldn't be ours. However as she's grown up there is no doubt at all. She just had a very different look as a baby than the rest of us.