Showing posts from June, 2015
Show all

Our little sweetheart riding the bus to school.

June 30, 2015
I know Brock put this on Facebook yesterday, but some of my friends don't do Facebook
and this is too sweet to miss.

Cami on her first day riding the bus to school.

A little late for Father's Day....

This was actually what my Dad did over 20 years ago.

Shows my mom with him back in the day, when he was running across the states. They would sleep
on gym floors and then he would run about 50 miles a day while she would follow him in the car. I
would be home praying a lot. And worrying.

Would you fly off your chair for this? 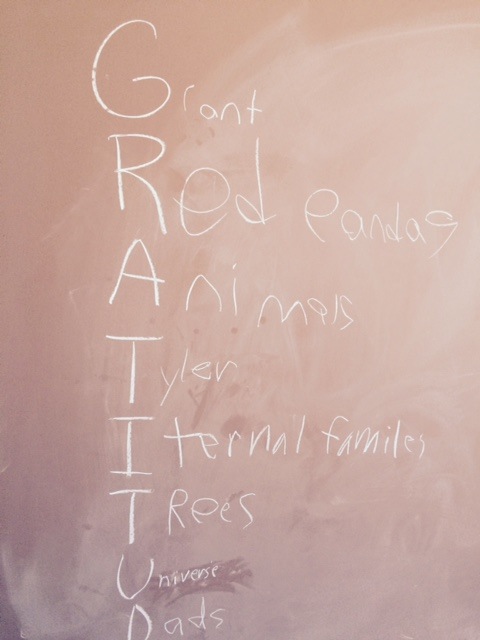 I got to teach six 8 year olds about gratitude last Sunday. After the story about the 10 Lepers and how
only one returned to give thanks for being healed,  I wrote the letters GRATITUDE lengthwise across
the chalk board. I asked the kids to come up with something they are thankful for using each letter.

One little girl immediately came up with "Grant" for "G" because she is thankful for her baby brother.
A boy was thankful for "red pandas"….not sure what that is. And on it went.

But the class was all stumped with the letter "I" I didn't want to give suggestions because I don't like
influencing their answers, so I waited... And waited.

Finally a little girl could hardly contain herself. "I know! I know! I know something I am thankful
for that starts with "I"!!"  I thought she was going to fly right off her chair.

So I handed her the chalk and this is what she wrote for "I" :

I didn't have the heart to tel…
5 comments
Read more

The best parenting advice I ever got

June 17, 2015
Dennis and I have been following the news story about that woman prison worker in New York who
helped 2 murderers escape. When the story first broke Den knew right away someone inside helped
those criminals get out. He even guessed the scenario…."probably a woman working at the prison who
was complimented and paid attention to by at least one of those 2 prisoners."

Got that one right! Plus, the accused woman said, "He made me feel special." She actually realized
how she was hooked.

This brought me back to the winter of 1984. I was pregnant with my 3rd son, McKay. Bill and I were
attending a birthing class put on by our midwife. After practicing our breathing, the midwife introduced
her husband, who was a licensed clinical psychologist who she said would speak to us on parenting. I
remember feeling the need to wrap this up and get on our way that Saturday morning. I thought we had
just come to brush up on our birthing skills.

June 07, 2015
So my nephew returned this week from his 2 year mission in
Argentina….

The surprise to me was seeing his sister Brooke come in on the same plane.
As you can tell when you watch this, I wasn't sure how to react to that!

And some day I need to remember to ask Brooke what in the world she was carrying home with her.
Davey's home!! from Jill Shelley on Vimeo.
9 comments
Read more

Part 2 of the FOOD on our trip 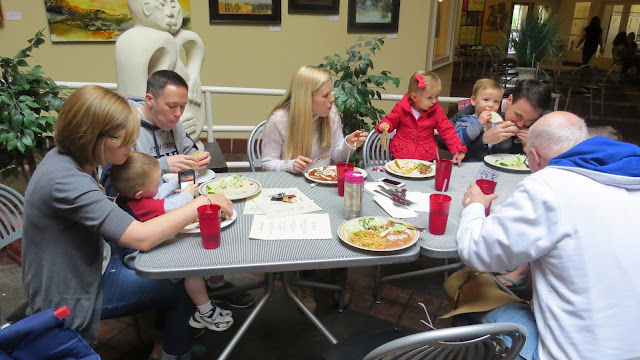 As  I said I would…..
here's what else we ate while in Washington…..
Fish tacos made for a perfect lunch after the Farmer's Market.  I wish I could find a good fish taco place in our area.  If there is one, please someone tell me.


We got to have dinner at Karen and Tyler's again.  Tyler made his famous ham fried rice. Or rather his father in law's
famous fried rice. He has made this before….
and we love it every time. Great how it's a meal all in one pan.  Lots of vegetables and 6 eggs stirred in that. They also served
some fruit but I was totally full from the rice.
Red Robin with boys and Karen… Scarlett was sick so we missed McKenna and hers.  Richie was sitting by me.
I feel like we had the place to ourselves….we kind of did.
Back to McKenna and McKay's for Chicken Tortilla soup…. again, from Pioneer Woman.
The toppings
Loved it so much I already made it after we arrived home.
apparently Richie and Scarlett thought it tasted great with a little dirt mixed in
Fun to final…
6 comments
Read more
More posts