A quarter of a century ago...

He was my third son. So why would I worry? I had no reason to think anything was wrong.
How could I have missed it?

Even looking at him while taking this picture when he was just 3 weeks old, I didn't notice it. I can see it now in this picture, but I couldn't see it at the time. The blueness above his lips, the struggle in his face. 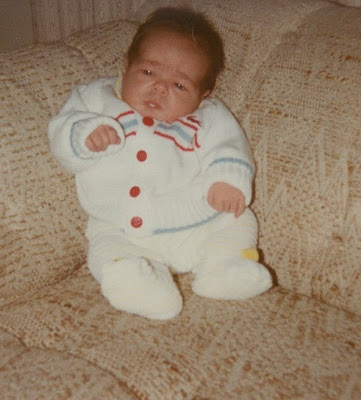 He was all dressed up ready to go to his well baby check up. He was suppose to have had this 2 days before, but I called and canceled. I told Myrna, the receptionist, that with recovering from his birth, I was just too tired to bring him in. I reminded her McKay was my 3rd. I knew what I was doing. I knew he was healthy. She insisted I reschedule for 2 days later.

Oh okay, whatever.
If I am still feeling like this in 2 days however, I will just call and tell them I'll wait til the 7 week checkup.

Two days later I was still not feeling all that well. My blood counts were having a hard time coming back up again after his birth. Still, after my prayer that spring Friday morning I just knew I needed to keep the appt. Not that I felt anything was wrong with my son, but I didn't want to disappoint Myrna. Or should I say, I didn't want to have to explain to her again why I did not need to bring McKay in for his 3 week checkup. It was easier just to go.

My mom came with me. as she almost always did back then. On the way there I was venting to her, "I don't feel like going to this appt. This child is so healthy, he's boring." Yes, I actually said those words.

We are in the waiting room. I complain again to my Mom but smile at Myrna. Soon I am in the well baby room taking off McKay's clothes. In walks Dr. Weinberg. He does the usual quick checks on him but stops at his heart. He keeps listening to it. Then I see him look at the pretty gold watch on his wrist, at the same time his stethoscope is on McKay's little 3 week old chest. My mom tries to break the tension by complimenting the doctor on his watch. He doesn't say thank you.

I look at my mom. She looks at me. I try hard to think....does he usually spend this much time listening to a baby's heart??

See, I remember the details as if it happened this morning.

Finally Dr. Weinberg looks up at me and says, "His heart is beating so fast I can't count it. It's over 300 beats per minute." I knew as a newborn his heart should have been in the 120-140 range.

He tells me I need to bring him right to Children's hospital across the street. He said, "Don't go home. Don't go anywhere. Just take him right over there. I'll meet you there soon."

As we are dressing McKay, I can hear Dr. Weinberg in the hallway calling the hospital. I hear him saying, "His heart rate is at least 320, maybe 350....."

The first of 5 times that day Dr. Weinberg saw McKay in the hospital, he said to me, "Myrna told me that you canceled McKay's checkup appt 2 days ago. That's good you did. 2 days ago his heart was probably beating fine and we would not have caught this. If you hadn't brought him in today, he most likely would have died in his sleep over the weekend....Someone was looking after you."

To make a very long and winding story short...McKay was in and out of the hospital numerous times the first 3 years of his life. He was on heart medication for 5 years. He was suppose to "outgrow" this condition but he never did. Dr. Weinberg had seen this condition before in other babies, but he told me McKay's was the most uncontrollable, and unsolvable.

We were to learn that he was born with an extra circuit in his heart. A surgical procedure for this condition became perfected enough by the time he was 9. So after much prayer, we opted to have this done for him in San Francisco.

His life changed. He could suddenly swim, play sports, and run at the park..with no physical limitations. He has not had any trouble with it since. He has a 10% chance of the circuit growing back. If that should happen he will just need the procedure done again.

I hesitated sharing this here. I don't want to sound like this is the focus of his life.

It's not, not anymore. 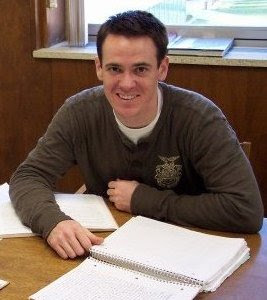 As I was driving around today doing errands, I was so overcome when I thought of the day...that it has really been TWENTY FIVE YEARS! I'm so grateful we got to keep him here on earth with us. I know not every family does, and I know it could have turned out so differently. But I also know now it was part of the plan for McKay to grow up healthy and happy. I don't believe for one minute that what transpired that day, 25 year ago...taking him to his well baby checkup on just the right day, was a coincidence. I ache for parents who do get to have this outcome.

Postscript: I wrote the above this morning. Then today at 5:30 Den comes home from work as usual carrying our daily mail. In it is a letter from President Samuelson, stating that McKay will be graduating from BYU in a few weeks. Not that this is news to us, but for this letter to arrive TODAY of all days...my tears all came back again.

Ronnell said…
Wow Jill, that you can remember those details so well shows what a traumatic day that was for you. I too am so grateful that McKay's life was preserved because he went on to fulfill a wonderful mission in Florida. I am grateful that our family had the chance to get to know him then and see his wonderful example and that as a result I was able to find you as a friend. He truly is a magnificent young man and one I am honored to know.
March 31, 2009 at 4:02 AM

Dad and Susan said…
Oh Jill, I just have chills all over from reading this beautiful account. You are surely blessed to have such a remarkable memory, and most importantly, to recognize the source of this miracle. Your dad was equally touched. Thanks for sharing. Love, Dad and Susan
March 31, 2009 at 8:14 AM

Lisa said…
I felt the Spirit so strongly while you told this story. The letter is no coinicidence either. I told you before; I felt something very unique & sweet on the one & only time I've met McKay. I know I'll never forget the encounter because it affected me in a profound way.

This is how I see the effects of the Atonement and the great gift of the Spirit. These experiences we have all allow us to feel the powerful influence & presence of the Father & the Son. It is in the harder things we go through that allows us to truly come to KNOW of His/Their LOVE for us & watchful "eye" You have MORE stories and experiences to share than anyone I've ever met. I see the Glory of God in your life. It's been a real blessing for me. Thanks. I like seeing pics of McKay cuz he's a GOOD LOOKING guy to LOOK at!
March 31, 2009 at 9:36 AM

grandmapeg said…
Knowing McKay today, anyone would never suspect that he had heart problems as a child. He is so active from all of the stories that you have shared in the past. It was certainly a great blessing how things turned out with the doctor's appt. at the right time.
March 31, 2009 at 1:02 PM

Kathy's Red Door Welcome said…
This was a very touching story. You have a very special way of taking us all back in time. I'm so happy for you that it turned out like it did. Have a very happy birthday this week! I will be thinking of you!
March 31, 2009 at 1:11 PM

threelittlebackseatdrivers.blogspot.com said…
This made me cry...so touching...and now I am SO paranoid...I will keep all my dr's visits...or rather, try not to cancel them...I am the same way...some of them seem excessive in the beginning and it's nice to just be at hm recovering and not out and about...What's the status on the twins? Still doing well? I can't wait to hear when they are born, it feels like I have been following their progress on your blog forever...it's time they are here... (as if I needed to tell you that!) :)
March 31, 2009 at 1:14 PM

Grandma Honey said…
Oh my goodness Natalie, I'm sorry to scare you. You don't need that right now with a new born and a 1 year old. What McKay went through was not common but his cardiologist did tell us it tends to run in families...however NOW I know what to look for, or rather feel for. I just put my hand on the chest of babies now...if their heart is racing I will feel it. So far I have not found one baby with it :)
I could tell when McKay was in "an attack" that way. And then when he was a baby they gave me 8 hours...if his heart had not gotten back to normal within 8 hours then we had to take him to the hospital. We spent many nights of his babyhood sitting in the parking lot of the hosp watching the clock. An adult would not wait 8 hours...we need to be taken care of in minutes, btw.
But actually his experience taught me to be less fearful. I had no inkling anything was wrong with him but still he was looked after and all was well. I learned God is more in control that I understood before. He knows as busy moms we cannot think of everything. I think that's when he sends angels to help out. And when things do not turn out, that is God's will too.
I laughed when you wrote that it seems we have been updating Amy's pregnancy forever :) She has her next dr appt this Thurs, maybe we will know more then.
March 31, 2009 at 5:45 PM

Kris said…
Jill, I am just astounded at your memory. It's such a good thing to keep a record of these things as you can look back and see all of your blessings unfolding in your life. We love you McKay!
April 1, 2009 at 9:45 AM