Showing posts from 2014
Show all

One of my favorite memories from this Christmas 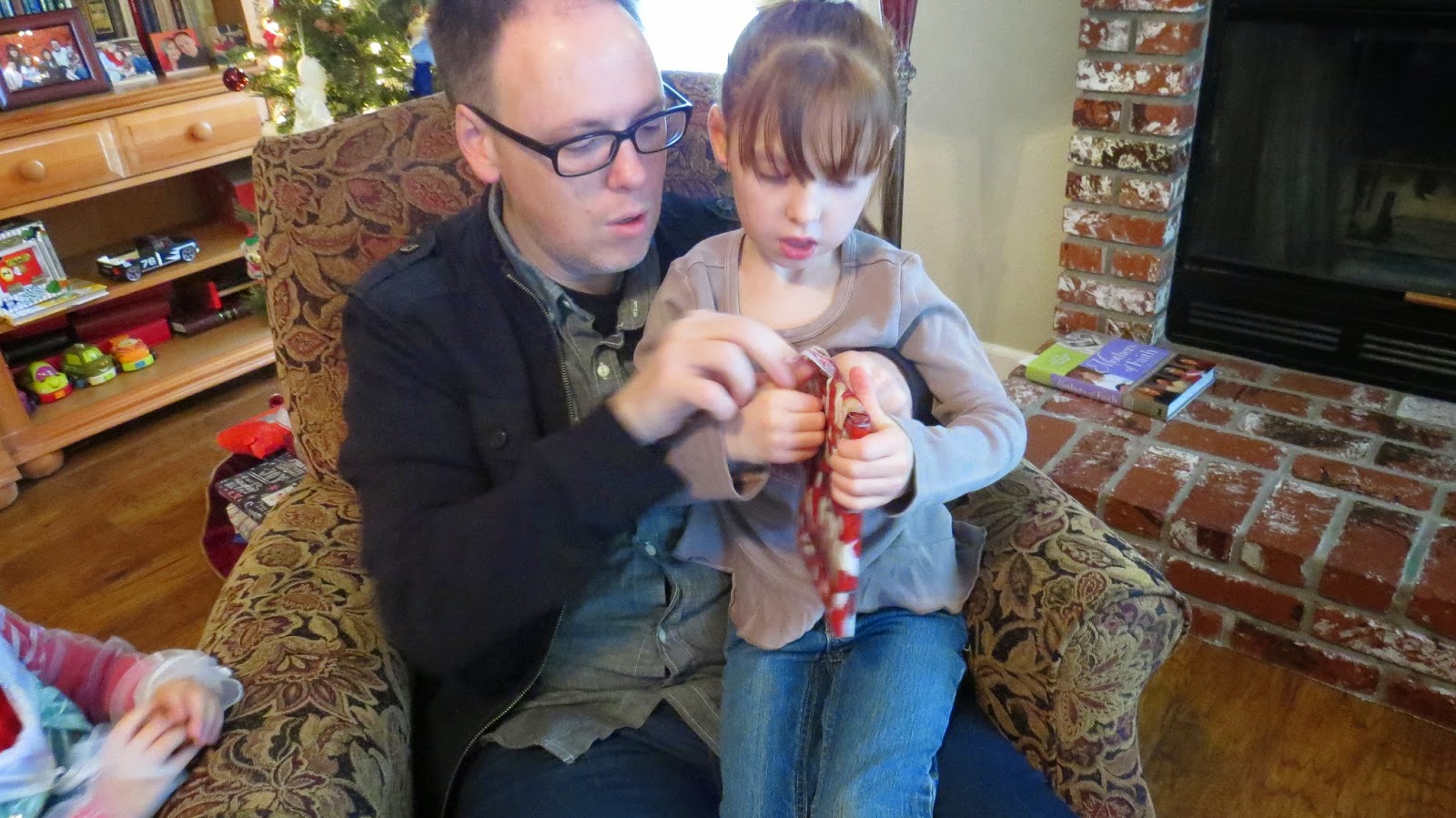 So as soon as she recognized what we were giving her…...

She totally lit up!

But what doesn't show in these pictures….

is how she immediately looked at her Dad  and said as plain as could be: "Look it!"


We had never heard her say that before! She just said it…. telling us there is lots of vocabulary inside of our Cami.  And then she went right over to find baby Jesus, again.  Cami knows so much more than she can tell us right now.
2 comments
Read more 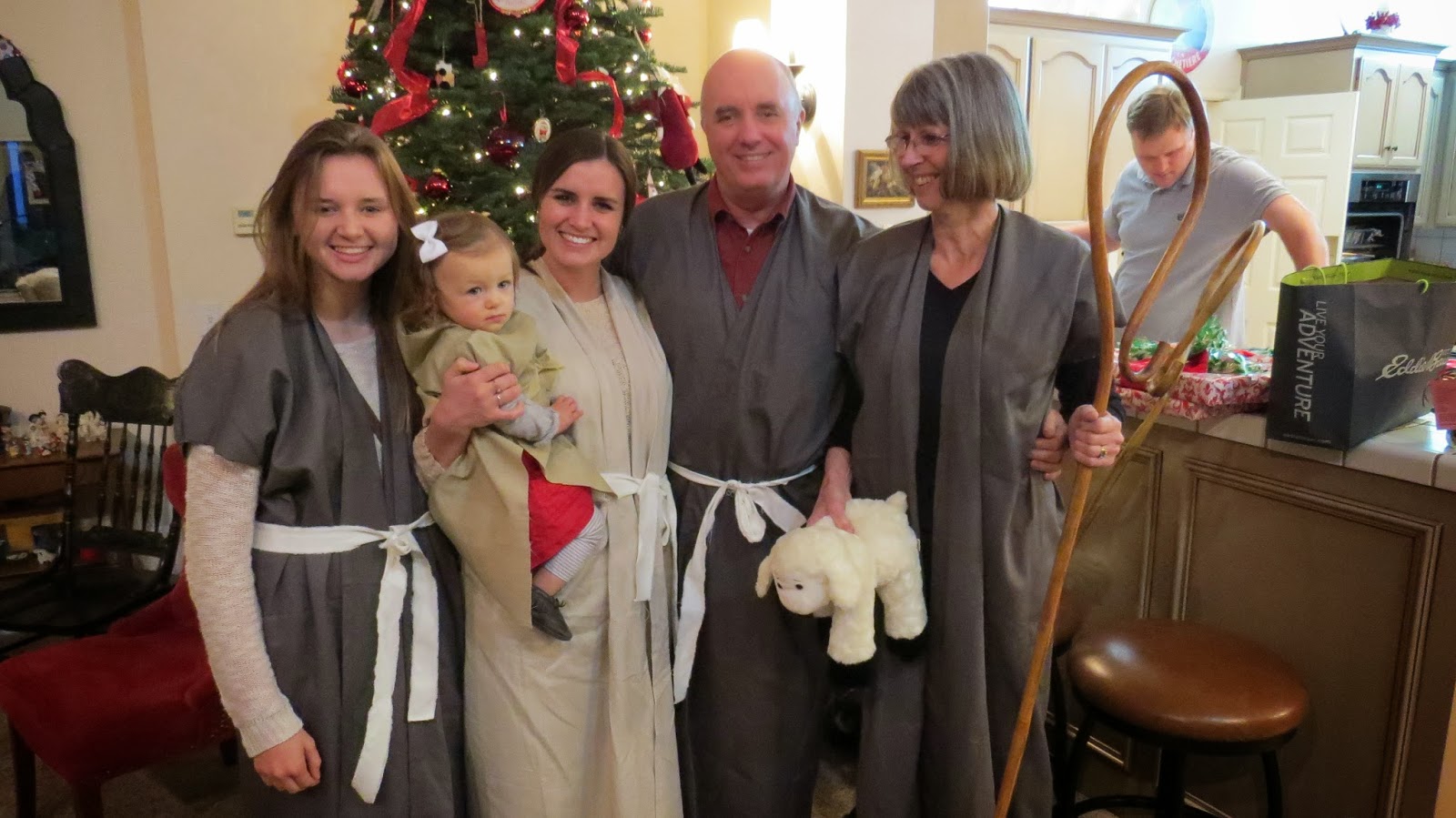 So we have this tradition now of going to Visalia for Christmas
Eve. My brother John and his wife Suzanne host a very Rozier-ish
homey dinner and program.


Arriving just after us were the Shepards. Literally, acting as the
shepherds. (I didn't even catch on at first….I just kept
thinking….'and why are they in costume?')

We missed those who could not be with us. There were far more missing, than present. And I did not get pictures of everyone present. I thought I could, but I didn't. But still, lots of relatives. Lots of food.

This warms my heart every time.  Amy takes a little out of the mashed potatoes before she adds the milk,  so I can have some too.

Conversations were going on all over the place…. Jeff and Dennis
Gracie and Calvary
My Dad and Peggy
Some even with their mouths full.
And for those (Sarah and Mara) who don't have all  their vocabulary yet, they use body language to converse.


Babies every where I turn….
Kat…
7 comments
Read more

Christmas 1957 and my Uncle Don

December 26, 2014
For those who didn't receive Uncle Don's Christmas letter this
year, here it is. For those of you who don't know our Uncle Don, he
is soon to be 90 and my mother's only living sibling. He worked at
the Fresno Bee while still a teenager and retired after having been
their managing editor for many years.

Below this letter, is an old home movie from 1957. I think
Uncle Don is one of the few I labeled by name, so you will see
him. He looks pretty much the same all these years later.

"Christmas Letter XXII Published annually since 1993 Greetings from Don & Donna
On October 20th, Donna fell onto an end table, broke five ribs and cracked a bone in her spine. On November 20th, she was home, having spent the interval in hospital and nursing home and, happy to report, was treated well at both. Pain pills and walker no longer required, Donna has resumed life as it had been.
Her accident had another consequence, as did the fact that my next birthday will have a zero in it. It g…
5 comments
Read more 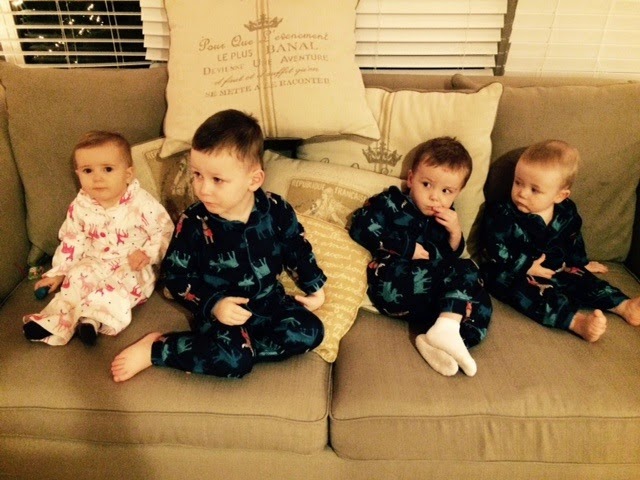 This is a tradition that was started in McKenna's family…. and the McKs along with Karen and Tyler and all 4 to their kids keep it going.
Two Days before Christmas...They camp out in the family room all together,  eating and playing games all day long.
Here's what they sent me tonight….THANK YOU Karen and Tyler and McKenna and McKay for  letting me a part of it some 800 miles away here in California
My grand babies in their matching Christmas jammies…. Scarlett, Richie, Grant, and Leo.
Intense game playing Oh, now that I look back on the pictures above, I guess McKenna
and Karen have matching jammas too.  How cute is that! And so do McKay and Tyler, apparently.  (brings me back about 20 years)

Looks like they cracked out the art projects out for the kids…..

As their games continue.


Because I'm sure these little darlings, as good as they are,  did not sit on this couch the entire day.

Just checked with Karen, and it's 9:30pm  and this party is in it's 9th hour and stil…
4 comments
Read more 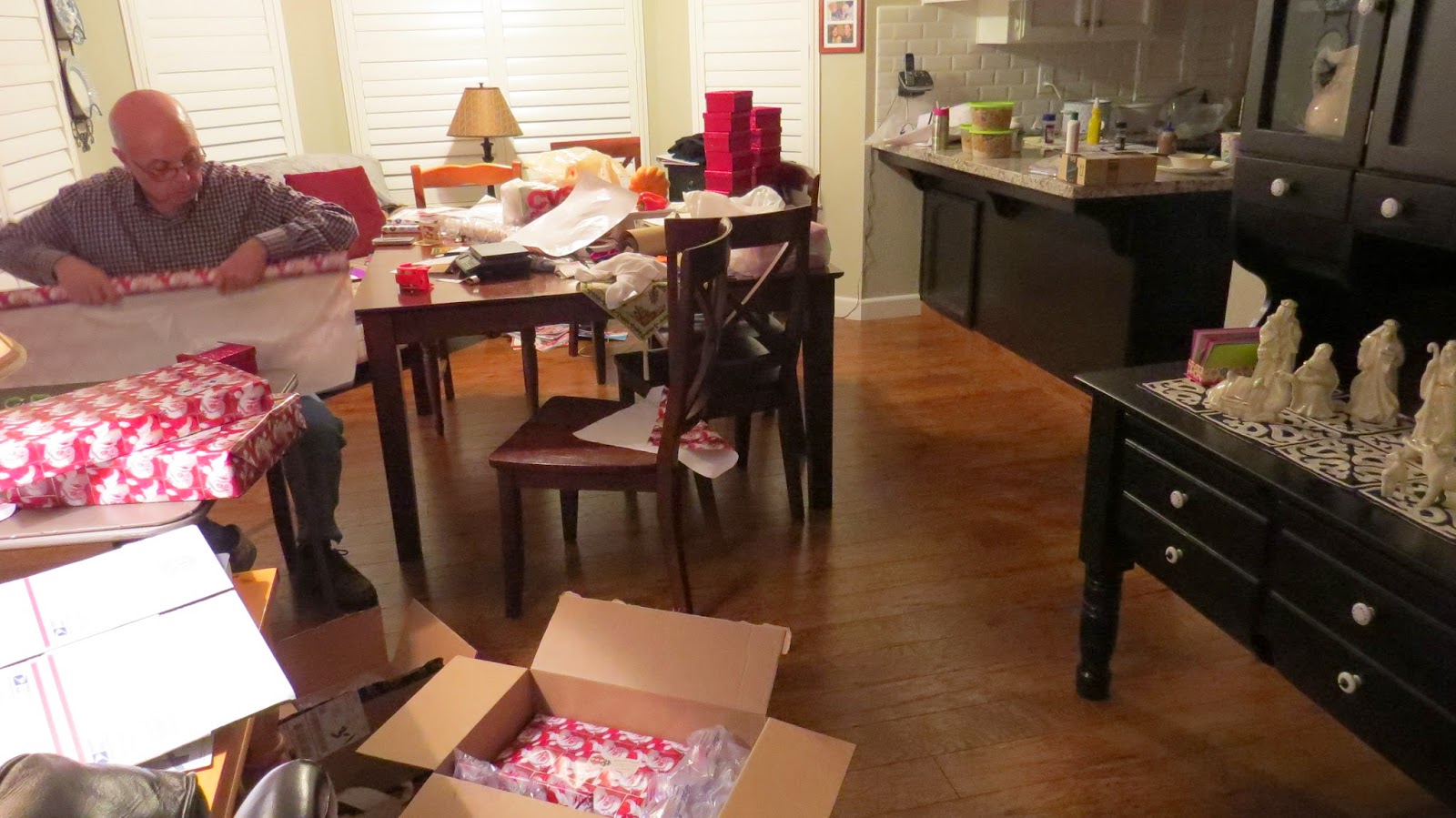 This is pretty much what went on here this week. Dennis doing all the wrapping and mailing.  It's his speciality. Not mine at all.

And no, he does not clean as he goes. But that is his only flaw.
I am really feeling the Christmas sprit this year.
For lots of different reasons, but mostly because we are feeling so very grateful for
our family and friends, and our health, and so many blessings.
And do you know what else is adding to our Christmas spirit this year? I discovered a TV station that we love. Yes me, who doesn't even like TV.

UP channel has their very own Christmas movies. Some very sweet movies.
Movies that focus on the real meaning of Christmas.

Check UP channel out HERE.

December 14, 2014
She is new in our ward. She and her husband have 5 children. I had never even met her, I still haven't.
But I think I will remember her talk during Sacrament meeting this morning, for a long while.

She talked about her own father. He grew up with an alcoholic Dad and a very depressed Mom, and
lots of abuse. Her Dad grew up never having a birthday gift, never having a Christmas gift. This
surprised me as I have known of many dysfunctional, even abusive families through the years, but all
that I knew of at least celebrated birthdays and Christmas in some way.

When her Dad was 7, his Dad took him to Disneyland. This little 7 year old arrived "bright eyed and
excited." When they got to the gate his Dad asked where he could buy a beer. He was told, "We don't
sell alcohol at Disneyland." So they turned around and left.

If the story wasn't already bad enough, the Disneyland story about did me in.

Yet, her Dad somehow knew there was a better way...Somewhere a lon…
3 comments
Read more

When did this become okay? 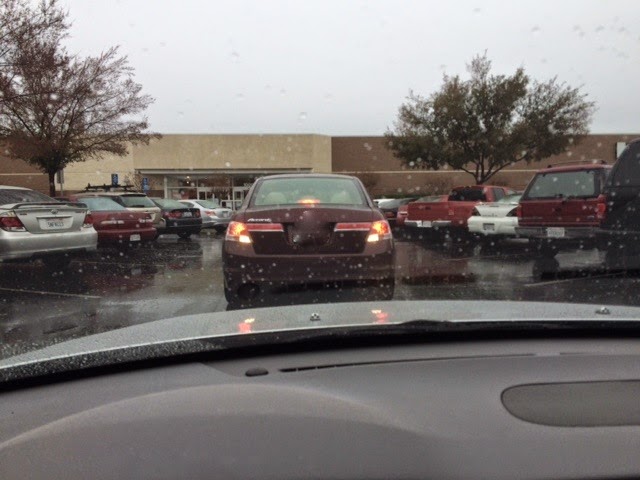 Do you ever find yourself waiting behind a car who is waiting for a parking spot they have picked out?
There isn't room to go around them, and you can't back up because there is a car behind you.  So you are literally trapped, waiting.  Sometimes the wait is just a few seconds, but often it is much longer than that.
Yesterday that was me trapped behind that car.  I guess she saw someone walk out of the store headed to one of the cars near her.  So she waited for the other person to get in her car, load her purchases,
adjust things, turn on her ignition and finally pull out.

It was a good 2-3 minutes.
Long enough for me to write this post in my head, and take a picture.
What makes people think this is okay?  As I was sitting there I thought, 30 years ago, this wouldn't have happened.  People would just keep circling the parking lot waiting until they found a vacant spot to park.  They wouldn't have thought to make others wait behind them.
This happens often now. Have pe…
14 comments
Read more

Babies were her favorite 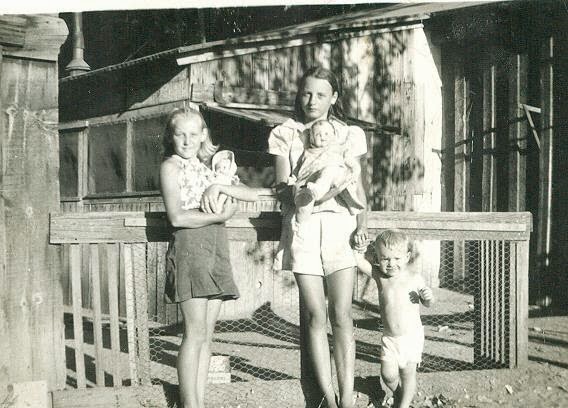 My mom (on the left) back in the early 1940s with her doll.  I do remember her telling me she had dolls long after most girls do.
(Although her friend Evelyn looks even older than Mom, or at least taller)
She was born to be a mother. In 1959 holding baby Robin, with John, Richard, and me. She went on to have 4 more babies.

She always had a baby of her own at her family gatherings. She gave birth from 1952-1967.
This was 1957. Mom is in the middle, 2nd one from the left.
My Mom's parents on center right, and the rest of the adults are my aunts and uncles.
See me with my doll sitting next to Richard?


Then the grandbabies came.
Just a few here of over 30.
Then the great grand babies (Elora) started coming in 2002
My Mom's 85th birthday would have been yesterday.  She's been gone since 2007 and I miss her every single day.
Below was my favorite quote from the Christmas Devotional last Sunday. It's quoted by Bonnie
Oscarson, who was quoting President Hinckley, who was quot…
7 comments
Read more 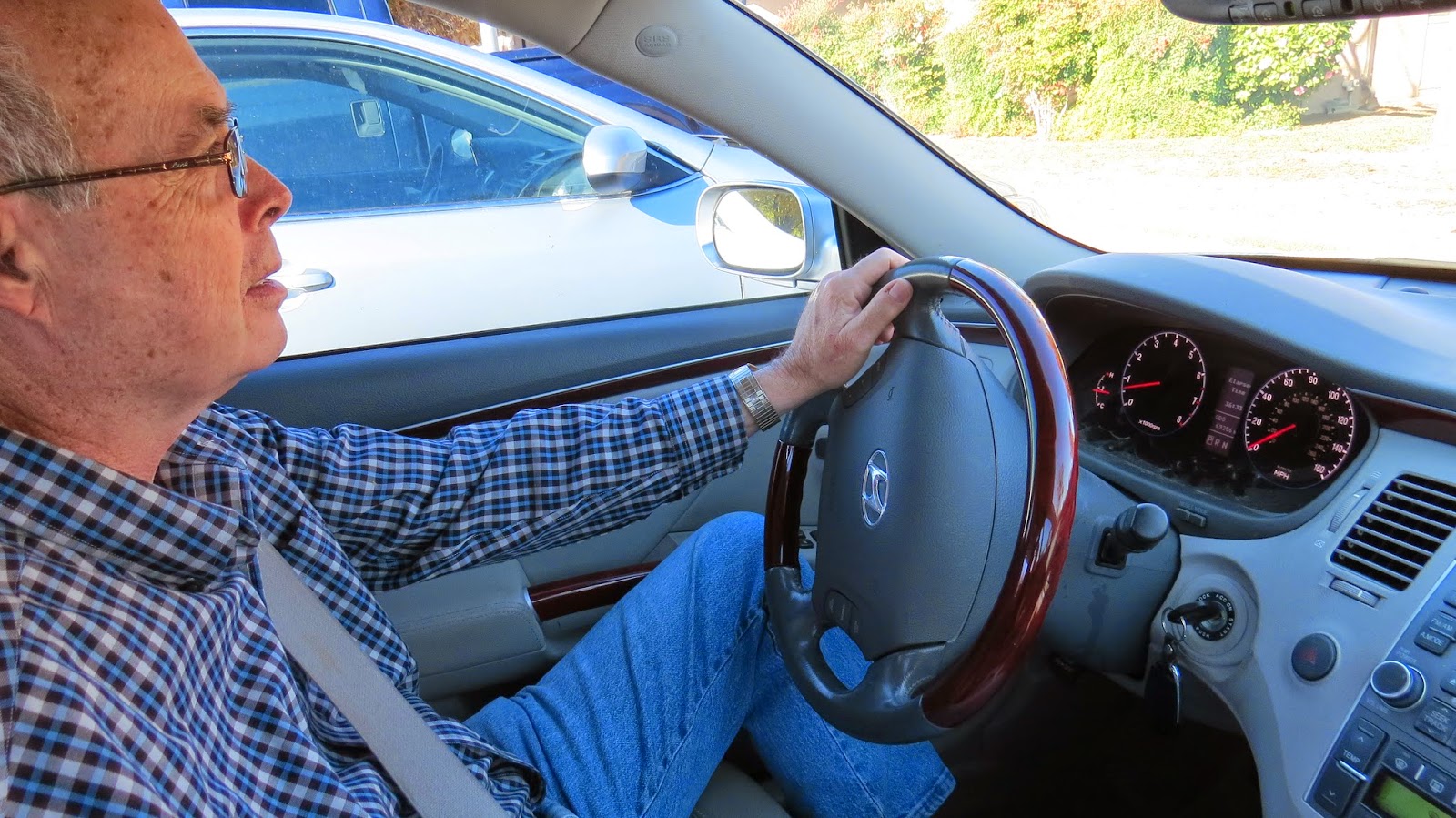 He arrived like anyone else…..
Then later when he thought when no one was looking,  he stepped inside one of the classrooms at the church.
Elora came with us….since it was her ward.  Her job was to let us know  when Santa was to make his appearance.
Something I never thought I would do is help Santa get dressed.
Finally he is ready,  Elora gives the signal to the waiting audience…. and out the door he goes
Oh no. There's a stray boy in the hallway.  Guess he was too excited to wait like the others.
If I hadn't helped dress Santa, I wouldn't have even recognized Dennis under there. He just did not resemble himself.

So I guess I shouldn't have been surprised when  Cami and Violet didn't recognize him either.  Cam was looking for an escape.
And Violet was not her happy self.
Santa talked to over 50 kids, and some very interesting ones.  Like this Mom who was showing him her daughter's list  on her phone.

And this sweet man in his wheel chair wanted to visit Santa too.