Showing posts from 2013
Show all

Our most memorable New Year's Eve 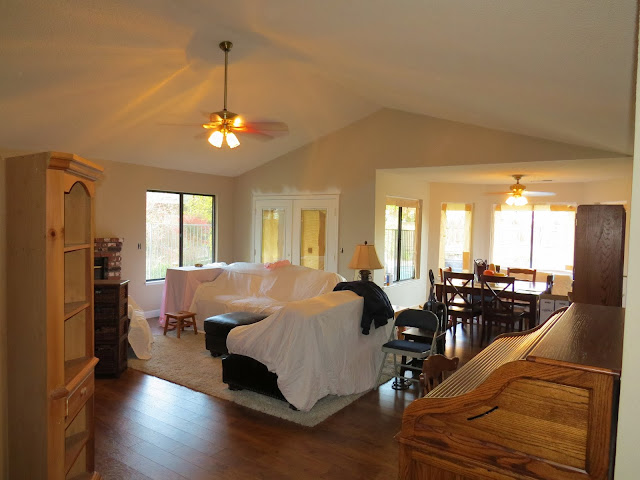 Our most memorable New Years Eve didn't happen tonight,  since we are into phase two of our house facelift...
But rather, it was 15 years ago tonight.  15 whole years have passed since then. Wow.
Dennis and I were on our second date,
and he drove in from LA to take me to this.  It was a New Years Eve dance for singles at this church building.
Only our second date, so we still didn't know each other very well.  (but we had been talking for 3 months prior, so we weren't exactly strangers either)
While Dennis and I were dancing, suddenly the power went out and the fire alarm blares.
Everything went pitch black.
We all promptly evacuated the building.
As all our fellow dance goers congregated around the doors outside
waiting for lights to come back on,  Den said to me, "Let's go sit in my car where it's warm."
Tonight we went back to that parking lot,
and we both remembered where his car was that night.  The second stall to your left.
15 years ago, there we sat and talke…
8 comments
Read more

A few of my diverse grandchildren

December 28, 2013
I sat down 4 of my little grandchildren to interview them, and of course it did not go as expected.

First we have Violet who had all the right answers, but apparently I had the wrong questions.
Then we have Cami, who preferred to get up and sit across the room. Then Jonas, who had a sudden career change mid sentence. And then Téa who will be whatever anyone wants her to be!
You'll see what I mean…

(oh, and the 2 clips at the end…I couldn't resist)

What do you think would cause this? 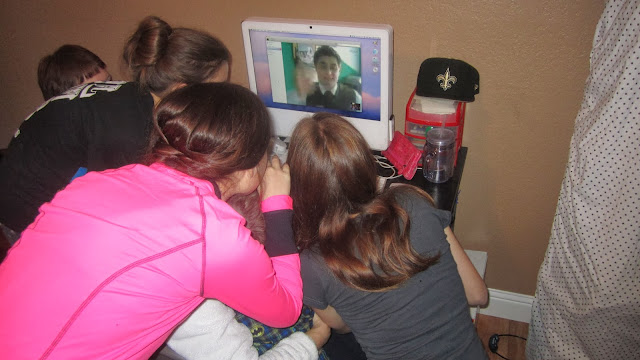 What would you think if you went to visit your son and his wife  and 6 of their children on Christmas day  and no one answered the door?
It was very quiet, yet we knew all 9 of them were home.  Actually, we even knew what was happening there,  and we were invited. So we opened the door and walked in.
No one was running through the house as usual.  No music playing. No TV on.
We went down the hallway a little and made a turn…. and there they all were……huddled together….


Even when we came in no one noticed us,  which is how it should be when they are talking to their missionary!

A marching band could have come in
and those eyes wouldn't have left that screen.
Even when I went in front of them to snap their picture,  no one took their eyes off Austin for even a second. I love it!  (although I think Téa's looking at Grandpa.)  (Logan, Chandler and Jonas and Grandma Karen were there, too….
but the camera didn't capture them)
After the Skyping session,
Amy got to have her alone phone time …
4 comments
Read more

December 22, 2013
A few weeks ago my good friend, Wendy K, mentioned on Facebook about
a beautiful song by Sara Bareilles. I just had to do something with it.

So even if you've already seen enough pictures of our children and grandchildren,
I think you will enjoy the music.

One unforgettable Christmas 25 years ago

December 21, 2013
Bill and I use to have this tradition on Christmas morning.
It's going to make us sound like lame parents, but it's what we use to do. After the kids had gone to bed on Christmas Eve, we would quickly fill  the boys stockings and hang them on the fireplace. We'd always remind the boys before they went to bed that night that they could get their stocking first thing in the morning but Don't wake us up!

Their stockings usually contained their breakfast so we had that covered too.

The older two would take care of the younger two. Sweet deal.

Consequently we have no pictures of our boys walking in to the tree on any Christmas morning of their entire childhood. No, that is because they were always up before us, and we were sleeping. Especially me. That was my Christmas present to myself each and every year.
Except for the Christmas of 1988. For some reason unexplainable to Bill and I, we awoke very early that morning…..about 5:30am. Both of us. So we went into the family room …
9 comments
Read more

This is the way Dennis shops 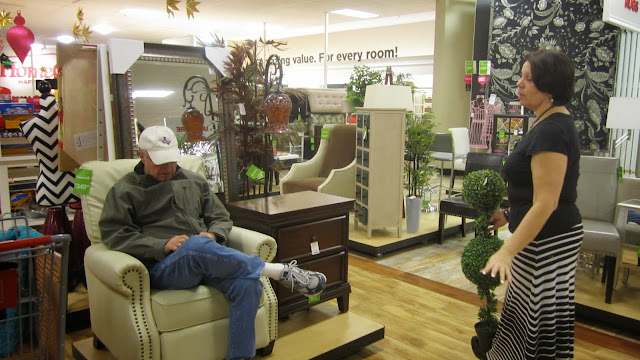 One of the perks of having a tall husband is I can keep track of him when we go shopping.  I just look around and I can usually sees his head above the aisles.
So I was a little surprised when the other night I couldn't spot him anywhere.  My eyes scaled the aisles. No Dennis.
So I walked around and finally there he was!
When I suggested that he go find a place to sit,  I didn't mean in the display!

I'm proud of him for thinking outside the box.
But truthfully, no surprise there. It's his speciality. He thought the saleslady was going to ask him to move.  But no, she was giving her approval.
Shopping was a great escapes from this.
Our remodel is coming along fine now, despite how it may look.
Can you understand why we aren't putting up a tree this year?
5 comments
Read more 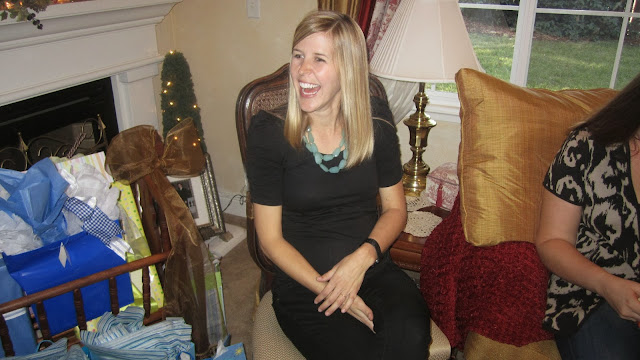 I don't know his name yet, but my niece, Whitney, and her husband Bret
are having a baby boy next month! Last Saturday at her baby shower,
she gave one of the most tender thank yous I've ever heard.

She said she has never been more happy than she is now.  The room was packed with family and friends  and she said it made her SO HAPPY that everyone would come.

She thanked us all numerous times.  If we didn't feel special before the her baby shower, we surely did while there.


What personality! I love watching her.

See the passion that girl has?

When Whitney talks to you, she's THERE.


I guess we have an idea now what little Baby Baker will look like…. Whitney on the left and Bret on the right.
He's gonna be CUTE!!

And now for the food….I remembered to take pictures before it was eaten this time...

When we were told we needed to "just take a look and memorize the items"… oh yes, we're good at this game, especially those of us over 50. I don't know wh…
12 comments
Read more

Evil did not win

December 14, 2013
A few weeks ago I mentioned a great short video that I wanted to share but couldn't.
I got to see it through Time Out For Women,
but it wasn't released to the general public until this week.

This shows what one little girl's family has done since their daughter's death at Sandy Hook,
a year ago today.

December 12, 2013
I thought it was a craze or a fad and didn't pay much attention to going Gluten Free.  I knew I wasn't Celiac.
However, the past few years I've been diagnosed with 3 "very rare" skin diseases.  I couldn't even tell you their names now.  But it made no sense…..why am I getting all these skin problems?
My doctor just kept throwing drugs at me. Finally one day just as I was leaving his office he said,  "Some patients get better going gluten free. So you might want to try that."
That's all I had to hear. From that moment on, gluten was history.  Not an easy thing to do to suddenly get rid of all wheat and most other grains.  It was surprising how gluten is in so many of our foods. I was hungry most of the time for the next  several weeks, until I found foods to replace all those I took away. And I did continually lose weight.  A few months ago I finally stopped doing that, and have held steady at 12 lbs gone.  I'd like to have 10 of those lbs b…
10 comments
Read more

I'm fascinated by this study

December 11, 2013
I love studies to do with people, and this one is particularly interesting to me.

This is what they concluded:
"… researchers found that stress declines from age 22 onward,  reaching its lowest point at 85. Worry stays fairly steady until 50,  then sharply drops off. Anger decreases steadily from 18 on,  and sadness rises to a peak at 50, declines to 73, then rises slightly again to 85.  Enjoyment and happiness have similar curves:  they both decrease gradually until we hit 50, rise steadily for the next 25 years,  and then decline very slightly at the end,  but they never again reach the low point of our early 50s."
So why is this? The author of this study said it could be anything from environmental changes or psychological changes.
OR it could even be biological…for example brain chemistry or endocrine changes.
I never even entertained the idea it could biological.

Spending the weekend with some of the best. 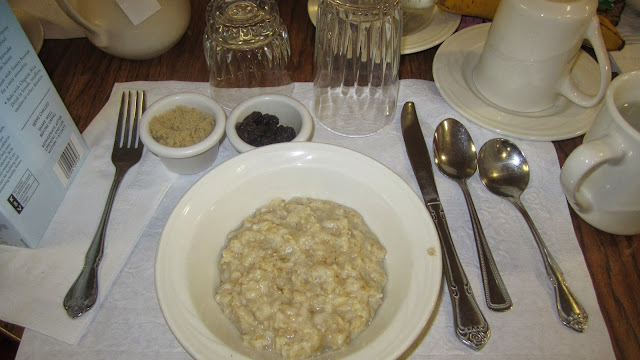 What is the point of people growing older and suffering? I've been trying to figure this out all my life.  I was there @ The Home this weekend taking care of my Dad while Susan was in Utah.  It's a very pretty place, and I so enjoy talking to the residents.  And of course I enjoy spending time with my Dad.
But it also has me thinking about aging.
I've always had such great respect for those who came to earth before me. And especially for this older generation now,  because these are the people who raised my generation.
One morning while my Dad was watching the BYU channel I heard a speaker talking about humility  and how as we get older we become more humble. How can we not?  Things are taken away from us one by one. Many are in walkers, many have canes or attached to  oxygen tanks, some are slumped over, and some, like my Dad are in wheel chairs.
But they all smile when I talk to them. I have not met one who is not gracious and kind to me.  Saturday morning while having &q…
12 comments
Read more

Who my mother really was

Thinking of my Mom today, her 84th birthday!


I can't remember how old I was...probably middle teen years…
but I nearly lived for my favorite TV show.
I can't remember why I would not be home to see it one day, or even what program it was!
But I remember asking my Mom if she would watch it for me and tell me about it when I got home.
Remember, this was way before VCRs.
When I got home she handed me a few pages of NOTES. All about my show.  He said, she said, they said. All the details. Keep in mind I was not an only child.  I was child #2 of EIGHT.
Mom with Peggy, baby #5.

My favorite movie was Pollyanna. No dvds back then.
At best, we had to wait for the movie to come back to the theaters which was every 7 years,
at least that is how I remember. So there was this long playing record of dialogue from Pollyanna.
I think 30 minutes on each side. I loved it so much that I wanted my mom to come in my bedroom
and listen to it with me. She did. Sitting on the floor right by me.
No pr…
16 comments
Read more
More posts