This man is 86 years old today. 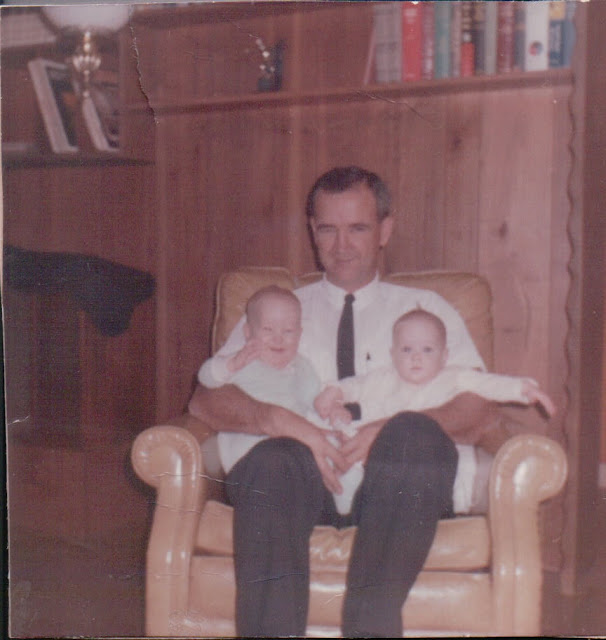 I have great love and respect for this man.

While we are young do we ever really know our parents as people?

Growing up he was always working.
He'd come home at 5:30, eat his dinner, then drop Alka Seltzer in his cup of water
and sip it while reading the evening paper.
My Mom would often tell me she thought he had a headache.

Then it was back again out the door selling more insurance until about 9pm.
After all, he had 10 people to support.

And never did I think much about it at the time.

For the past several years Dad has been in a wheel chair.
This man who once broke the world's record in his age division for the 24 hour race.
This man who ran 37 marathons....17 of them in Boston.

Yet now the days must be long and painful for him but he never mentions that.

I believe as a little boy, my Dad would have been like this toddler my mom wrote about in 1994.
That was the year Mom and Dad served in the church Nursery together.

"I want to share what one little boy taught us a few weeks ago.
Richard Hamm began coming to nursery about a month ago
with his Dad. Two weeks ago his father got him settled and
decided to see how he would do without him. Af first he was
fine and then when he noticed his dad was gone he began to cry.
Dick picked him up and held him on his lap but he continued to
cry. Before his dad came back to check on him we began
announcing that was time to put the toys away. Richard slid off
Dick's lap and began picking up toys and putting them in the
cupboard. All the time he kept crying, working, crying some
more. That little boy taught us a lot about courage. He knew
what he should do and although his little heart was breaking he
did it.  When times get tough in your life remember little
Richard. It's ok to cry, but don't stop doing what you know is
right even if it's hard."

Btw, would anyone happen to know that Richard Hamm in the story above?
I think he must be about 24 now. I'd love to give him this story about what he was like as a little boy.

The McKs and their 3 littles arrived in Massachusetts two days ago.
McKay said so far it looks similar to the Portland/Vancouver area
they came from with all the lush green.

I just had to share this video taken today at McKenna's sister's home.
Grant is obviously loving it there. Not so sure about the chickens.

The McKs have been living in a hotel this week.
The entire contents of their house and car are on its way to the Boston area. 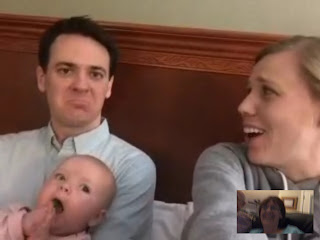 Must be very unsettling feeling homeless for about a week.

McKay was offered another actuarial job, and
because he wishes to become more diverse in his
field, he's making the switch.

The Goodbyes have got to be the hardest!

So last night after having gone out to dinner and then to visit my Dad and Susan, we were just driving
into our cul-de-sac at 7:30 when we noticed our garage door was wide open. We both felt panic. Or
maybe it was just me.

And at least one of us said, "How could it be open? We would never drive away knowing the
garage was open!!"

So Den pulled into the driveway and went inside the house to check things out while I stayed outside.

While I'm standing out there, up comes this cute little girl riding her bike. I had never seen her before.
She stops right next to me, and shyly and softly says, "I've been meaning to tell you, uh...did you
know your garage door was opened all the time you were gone?"

"Yes I saw you drive away and it was open."

That was a relief. Glad it was us, and not someone else.

As we were talking, I found out this sweet little girl is only 7, she lives in the house at the end of our
street, and her name is Hannah.

"So Hannah, how long had you been outside tonight?"

"I stayed out here the whole time you were gone and I watched your house."

"The whole time Hannah?! You were out here in front of our house for TWO hours?"

About this time her Dad shows up. He said when we first left, Hannah came running up to him
saying, "They left, and their garage is open!" He told her that maybe one of us were still in the
house. But little Hannah insisted, "No, I saw them both in the car."

Her Dad said she was worried about us and wanted to make sure our house was safe.

I'm hoping when she is older, she will remember what a good person she was even at age 7.
I do believe goodness begets goodness.

Have a happy happy Mother's Day!

It was a great way to grow up. I still have this picture in my mind....
I could hardly wait to see my Mom again after a long day at school. And there she was surrounded by
toddlers and toys, with one leg draped over the back of the couch eating her candy bar while reading
her Good Housekeeping magazine.

She would see me, look up, and smile. She'd put down her magazine, but not her candy bar, and just
listen to me go on and on about my day at school. I had to get every detail out. And she listened like
what I had to say was the best thing ever.

I grew up with heaven in my home. If I could tell her one thing right now, that would be it.


PS  My Mom did NOT like Mother's Day. I don't even know what to say to that. She just didn't.
She was continually telling us the virtues of other Moms we knew like she didn't measure up to them.

She didn't read to us, or sing to us. She didn't decorate our birthday cakes or make our clothes.

But she was the kindest woman I ever knew. And we got to see examples of that on a daily basis as
she not only took care of all of us, the neighbors, her friends, and anyone else along the way. If
someone was hurting or had a need, and she knew about it, she was there.

She never even remotely pretended to be perfect.
Here is an excerpt from a lesson she gave in Relief Society on raising children:

She was exactly the Mom I needed! What angel she was. 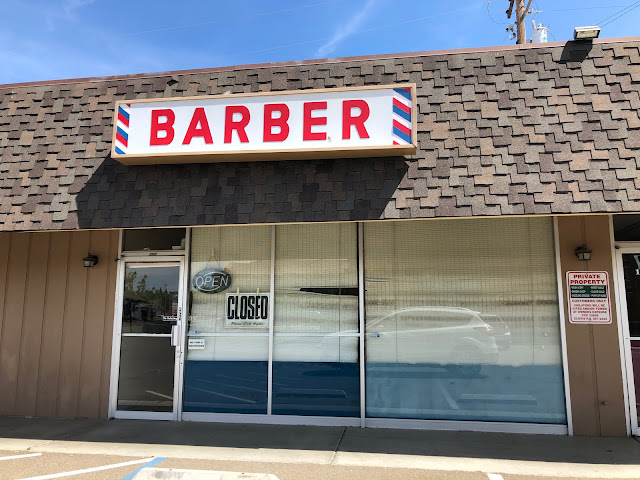