Showing posts from January, 2018
Show all

One of the most sensational court cases in Visalia's history 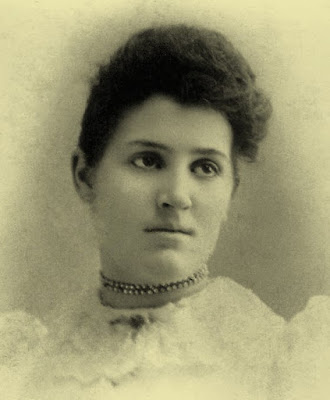 And the man she wanted to marry, Lee Jackson Danner:
But he didn't want to marry her, so she took him to court and won!


Before you read the story below, I want to preface it with this: Nearly 5 years ago in one of my
Mom's scrapbooks I found an article from our newspaper written in 1991, about this story. That was
the first I'd ever heard of it. So that was 2013, and I contacted the author to thank him, also telling
him that I was related to Laura Slinkard. Fast forward 4 1/2 years...About 2 months ago, the author,
Terry Ommen, contacted me again letting me know he had found some new info on the case and that
he was in the process of writing an updated version of this story for Visalia's magazine, Lifestyle.
That issue came out last week, and he graciously sent me a copy, which I was excited to read!

Here it is.
I broke it down in parts hoping to make it …
10 comments
Read more 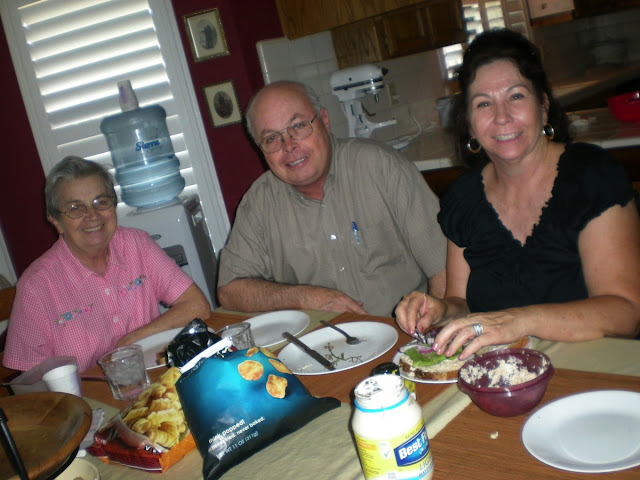 There was this girl in high school and I can't even remember her
name now, but in her yearbook I remember writing to her,  "You
are the most excitable person I know!"

But that was years before I met Jill Thompson. She even beat out
my friend in high school, for being the most excitable and
exuberant person I ever knew.

Jill T and I were not best friends by any means, but we were close
in that I was completely relaxed around her and we could talk and
talk. But then, I think most people who knew Jill T felt this way.

She just had that golden something. That smile. Those continual
inquisitive eyes. She loved people. She had an insatiable interest in
everyone it seemed. She wanted to know what they were all doing,
and who they were doing it with.

I have many memories of her, but this one sums up her personality
pretty well I think...

It was about 2009. She dropped by the house one afternoon to give
me something. Can't remember what it was but we were both
counselors in ou…
2 comments
Read more

Oh the sweetness of it... 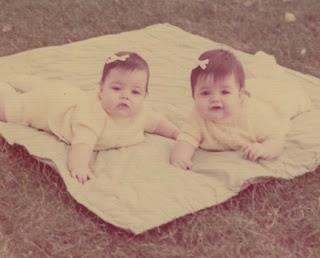 So when one of them comes to visit us, he's quite happy to have his little girl right next to him. We both are.

This time Kim brought her daughter, Emily, with her.
It was SO fun.
Loved having them with us!

So thankful we got to see Emily one more time before  her 18 month mission begins in 2 weeks.

One of my favorite parts of our visit, was looking back through old  videos I had of Emily's childhood.


And while we were at it, they showed me a blog Kim follows so we  got to watch a live gender reveal of quintuplets together! I kept thinking, "Live? They're going to do this live?"
check it out...it's really cute

We even talked about how we are SO thankful  Emily survived THISa year ago.


One of the bonuses of this trip, was finding out that our ward  Young Mens' President, served a mission in the very one Emily is  going to....Cape Verde Praia

The more we do, the easier it gets? 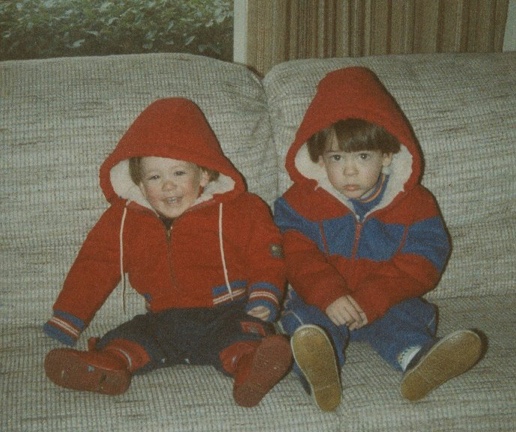 29 years ago today my first husband, Bill, was shot up
numerous times in an armed robbery. I can't even remember
how many bullets anymore. 17? 19? And it was hard to count
since some were exit wounds.

I remember the first day he came home from the hospital
after spending 3 weeks there. It took me THREE hours to
dress all his wounds...and I was suppose to do this 3 times a
day!

How in the world was I going to manage that?! This
even included my Mom coming over to our watch 3 year old
Tyler because there was no way I could keep everything
sterile with him in the room.

But over the course of several days I got the process down to
45 minutes a time. That was doable.

As my father use to say through out his life, "That which we
persist in doing becomes easier, not that the task itself
has changed, but our ability to do so has increased." (or
something like that).

Those weren't my Dad's words but they always will be to me.
He said them often to us growing up. And it'…
4 comments
Read more

Scarlett has a message for us. 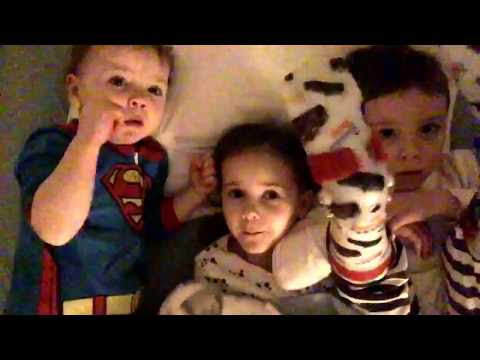 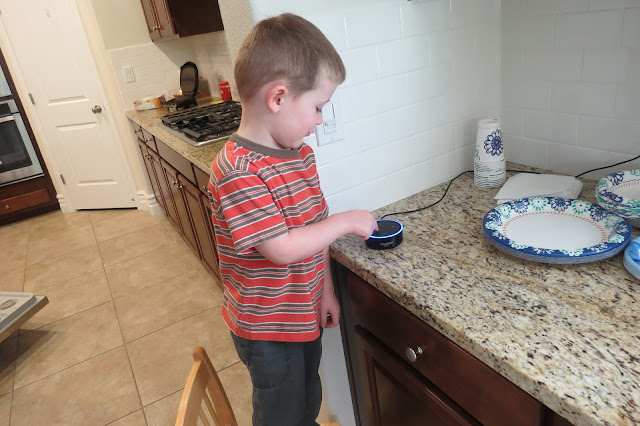 Leo kept asking Alexa to play this certain song  (I can't remember the name of it now)
The first time or two, Alexa played it just fine, and Leo was happy.
Then, I think Leo was not as careful pronouncing it, or he would  pause too long between words, so with each subsequent try Alexa  continued to say, "I don't know that one."

Leo was getting so frustrated with Alexa, but he kept on asking.

Time after time...becoming even louder with his requests.

And Alexa kept saying each time he would ask,  "I don't know that one."

Finally in the background, Leo's 6 year old brother Rich said to me  very quietly, "Alexa is just saying that because she's getting  tired of singing that song to Leo."
That makes me laugh every time I think about it.

Even Juliet made her requests...

She would run up to her and say, "Es-sa" Can't leave the little sister out. 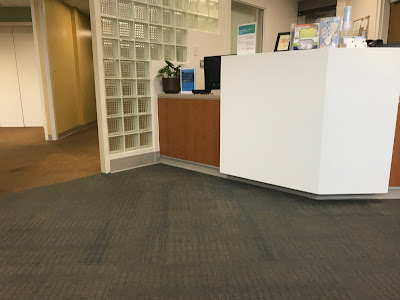 Last week I had allergy patch testing done on my back  at my dermatologist's office.


Lovely as it is.

Then I returned 48 hours to get the first reading.
The nurse said most everyone who takes this test  comes back with negative results.
She took off the patches, looked my back over and announced,  "I see something!"

It showed positive for gold. (the other spot to the lower right is hair dye and not a reaction)

I haven't been able to wear my wedding rings for more than a day  or two at a time without breaking out for the past 40 years.  Okay, not much news there.

But then another 48 hours after that, I showed positive for Nickel. 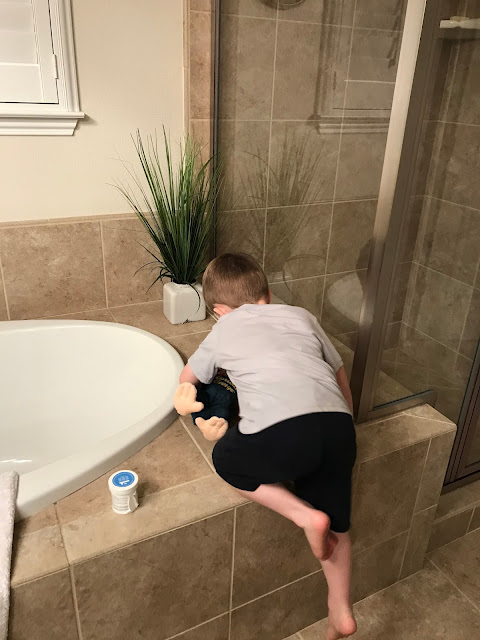 We waited 2 months for Leo to come to Clovis  so he could help us with our clock.
It had been an hour slow since  October when the time changed.
Since I couldn't climb up there to change it,  I thought our 4 year old Leo would be perfect for the job.
He hoisted himself up there with no problem.

"This one Grandma Honey?  This is the clock you want me to fix?"

Oh that proud I can-do-it face!

I then set the clock back an hour.

The harder part was for Leo to get the clock  back on the nail just right.


I thought he might not be able to do this part,  but he got it on the first try!
Success! Thank you Leo!
So I went to find Grandpa Dennis so he could come see  what Leo did for us!
We came back to find this.

Leo was just so proud of himself  he could not leave well enough alone.

So then it became a game. 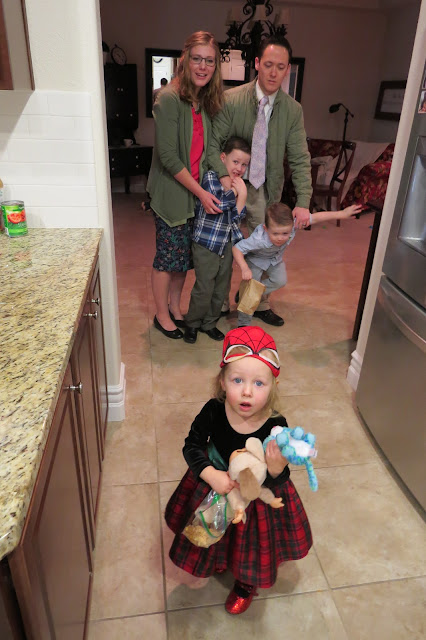 At bookclub on Thursday, my friend Kristi asked me....

"Your granddaughter, Juliet's her name, right? I saw her at
church. Uh.... was she wearing part of a spider man costume on
her head?"

"Yep, that was our Juliet."

"And was that her saying AMEN real loud after the prayer?
She must be two, right?"

Kristi really pays attention.
But then, some things one cannot miss.

She's "borrowing" it from her cousin Jonas.

She wore it the night before to Cafe Rio.


And she slept in it.
This is a girl who knows what she wants. I miss you Jubee. Vancouver is so far away.
Do you know what my Mom would say about this? She would say,  "Karen and Tyler are really good parents to let Juliet be a 2 year old (or almost)."

She couldn't explain her head to me. 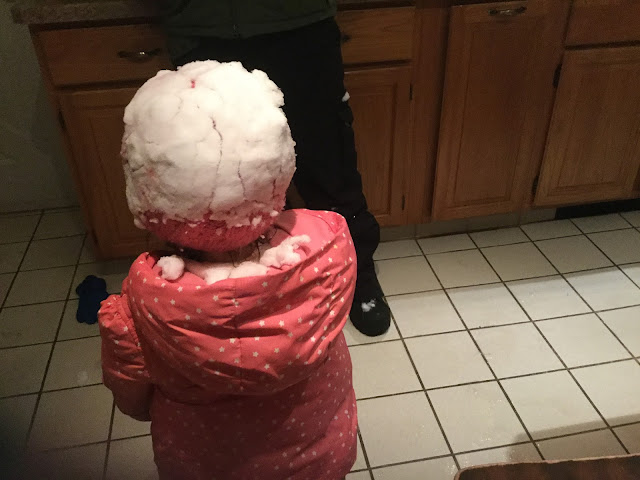 While looking on the computer today, sometime around noon, I
noticed the main CNN story was the horrific weather in
Massachusetts.

That's where McKay and McKenna live.

Something about a bomb cyclone and blizzard conditions.

That's when I got on my phone. First I called McKay. No answer.
Then McKenna. No answer.

Then I sent McKenna a text, and and said I was worried and asked
if they were okay. She texted right back with, "Yes!!"

Then she called me. She said the kids were playing in the snow.
That they were all home and planning to stay there.

Part way through our conversation, McKenna started to laugh and
said Scarlett had just walked in the door and she tried to explain her
head to me. Then she sent me a picture.

McKenna said it "wasn't too cold out there....in the 20s"
Those temps would be the coldest of the cold around here.
All's well that ends well, right?