Did any of you catch the 90 minute special about President McKay's life on the BYU channel this month?  I finally saw it yesterday and it was outstanding.  Loved it.  But then I love President McKay.  He served as President and Prophet of our church most all my growing up years from 1951 (at the age of 77) until his death in 1970.

On the program I got to actually see him make his famous quote, that I heard often while growing up:

"...No other success can compensate for failure in the home.  The poorest shack in which love prevails over a united family is of far greater value to God and future humanity that any other rich.  In such a home God can work miracles, and will work miracles."


Yes, I did name my son McKay after him.  When he was 9 years old, his father and I took McKay to San Francisco to get his heart fixed.  I had made 2 trips to SF prior to his surgery date to talk to his surgeon and to MAKE SURE I could stay with McKay in his hospital recovery room.  I was assured, YES, they would arrange this and make it possible.  Accommodations are made more for parents these days, but this was 1994, and NOT separating parent and child was a fairly new concept.

Imagine my disappointment (and anger) when we arrived the scheduled day and told, NO, I would need to sleep down the hall, but not in his room.  I was told the one extra bed in McKay's room was occupied by his heart-patient-roommate's mother.

This roommate's mother overheard me talking to the hospital staff.  She came up to me and said something like,  "I have been here for 2 months.  I can sleep down the hall tonight and you are more than welcome to have my bed so you can sleep by your son."

Of course I was not about to take this mom away from her son.  Then she said to me,  "Are you LDS?"  I asked her how she knew.  She had heard McKay's name, and she said McKay was her maiden name.  She explained that her Great Grandpa Thomas McKay was President McKay's brother.

Somehow, I feel we were suppose to meet.  We ended up both spending the night in our sons' room...she in the extra bed, and me with McKay (hope this does not embarrass McKay...after all, he was only 9.)  Somehow with all the monitor wires hooked up to McKay, I was able to find a small little spot so I could be near him.

McKay was released the next day.  Skyler, his roommate and only 7 years old, was released 2 months later to go back to his heavenly home.

I will never forget Skyler's mom who was so willing to help me out, a stranger,  even when her own heart was breaking.  I still look forward to her Christmas card every December, complete with family updates.


The new and improved McKay with Tyler at the Sound of Music play, a few weeks after his "surgery."
Dec. 1994 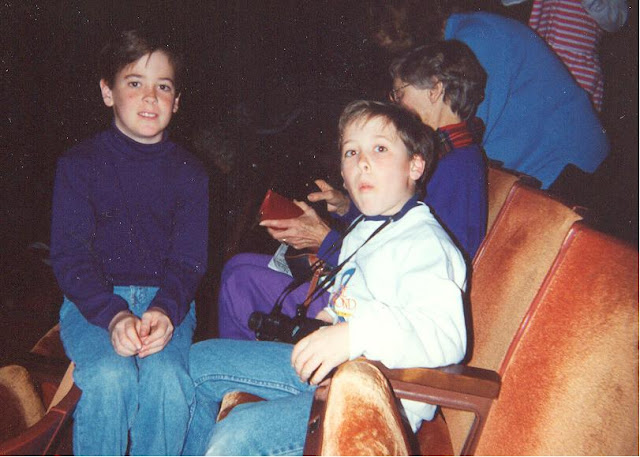 Karen Mortensen said…
What a very sweet post Jill. Thank you so much for posting this. I am glad that you still keep in touch with that woman.
June 29, 2010 at 1:31 PM

grandmapeg said…
What a sweet story. I knew that McKay was named after President McKay but I had never heard this story before. How nice of that mother to offer the bed to you. Your are right, now times are different and the hospitals do try to work with parents staying in their child's room.
June 29, 2010 at 4:40 PM

Natalie said…
I love that quote. I'm emotional anyway at night, but reading brought a lump to my throat tonight. Clearly, you took that to heart as you dedicated your life to being such a wonderful mother to your boys. Beautifully story as well, I love the way you write.
June 29, 2010 at 9:42 PM

Dad and Susan said…
We echo the previous comments. Each said exactly what we were thinking! Love, Dad and Susan
June 30, 2010 at 9:31 AM

Susan Anderson said…
What a wonderful story, Jill. Thanks for sharing it!

And in answer to your question on my blog...Nope, none of the people in the other photos are related to me. But aren't they great?

Lisa said…
Another piece woven into the fabric of your life's story. So amazing the things we pass through let alone what we discover about you!

Skyler's mom sounds like a real living ANGEL. It would be nice to see a pic of her family if she ever sends you one at Christmas. I'm gonna have to go watch the BYU program about Pres. McKay.

I alos loved that you posted the WHOLE quote. Usually we only hear, "No other failure can compensate for failure in the home." The rest just brings it all together.
June 30, 2010 at 6:30 PM