I think he was incredible 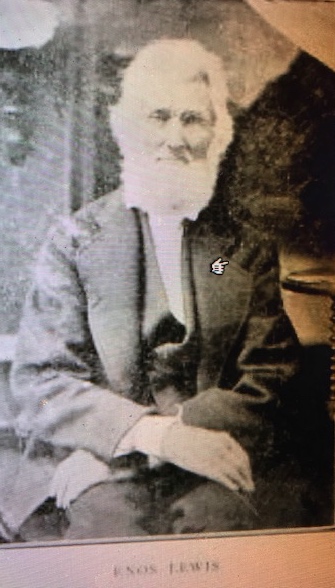 Okay, you got that?

Now I want to tell you what I found out about this man Enos Lewis.

I found the info below in an old book first published in 1903.
(thanks to my sister Heidi)

From Morgan M Lewis about his Uncle Enos:
"He was one of the first to take a stand against American slavery and wielded a power that was felt both in his public speeches and through his financial aid. The writer well remembers going to his house and seeing a company of splendid looking colored fugitives, some twenty-six in number, who were being sheltered and fed. Uncle Enos never seemed so happy as when he was doing some act of kindness to his fellowmen.

"He abhorred intemperance and profanity and was a shining star to those who might look for the light and in him could find an example that would be safe to follow.

"He loved children and nothing pleased him more than to teach them, and his lessons were of a high order. He believed in a future and a just and impartial God who never created a soul to be lost."

Enos Lewis' daughter said,
"Father's sympathies were enlisted at an early age in behalf of the poor downtrodden slave. I have hear him tell how, when they lived in Ohio, he aided the fugitives who were fleeing from bondage in quest of liberty, by hiding them in his father's barn before he could get a chance to help them on to a place of safety. On one occasion he had three or four of them secreted in the hay mow. His brother Hervy (who was then too young to share the secret, but who afterward became a strong supporter of the anti-slavery cause) went to the barn to hunt eggs and walked all around over the fugitives, but did not happen to discover them. When night came, and the family were all in bed asleep, father took his father's horses and wagon and carried his charges toward the land of freedom to a place of safety, returning to his bed in time to not be detected. He continued in that work until slavery was abolished. He was always in support to those needing help and mother always sustained him in his good words.

So I started to wonder where Enos got his strong objections to slavery and sense of duty to his fellow man. Than as I read further I found this:

From the death notice of Enos Lewis:
"...He was an early and active opponent of slavery. His parents having left their Virginia home on account of that curse existing there, left a lasting impression on his mind that governed his whole life..."

krheasley said…
Wow! What a legacy! I’m sure that living the life he did wasn’t easy or safe, but what a blessing your ancestor was to so many! Very very neat.
October 14, 2018 at 9:49 PM

This is where Family History becomes inspiring! Knowing Grandma Lella it's easy to see that she didn't fall far from the tree. Some trees we should all stay close to.
October 15, 2018 at 8:34 AM